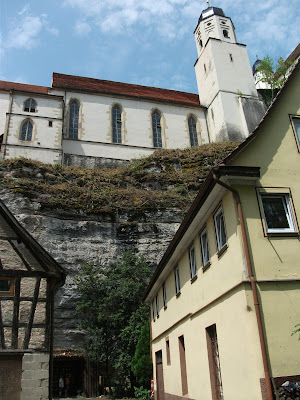 Once in awhile Mac and I happen onto the most interesting places.
We had driven through the charming town of Haigerloch on our way to a Roman Museum.
We decided to come back and explore.
Here we found a most interesting museum tucked into the hillside. 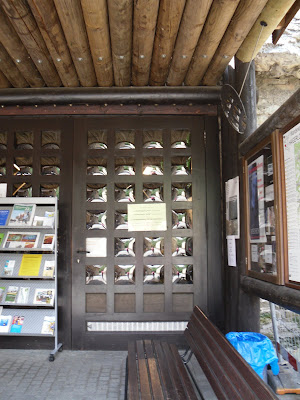 This is the entrance to the Atomkeller Museum.
In this rockhewn beer cellar, a group of German scientists from the Kaiser-Wilhelm Institute in Berlin worked
to develop nuclear fission. 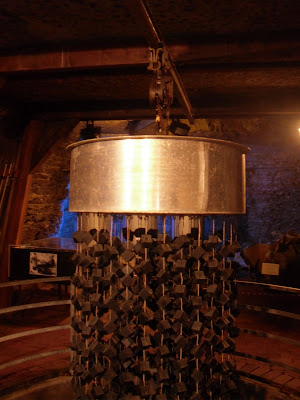 In 1943 the air raids on Berlin were so intense that work would not be possible there.
South-West Germany was still quite safe from air raids and the scientists took residence in Haigerloch. 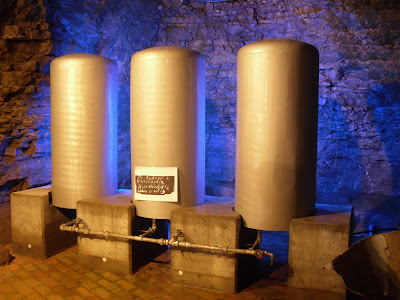 Heavy water tanks in the cellar. 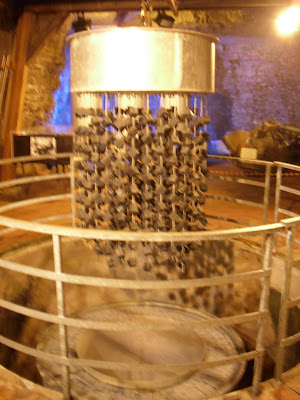 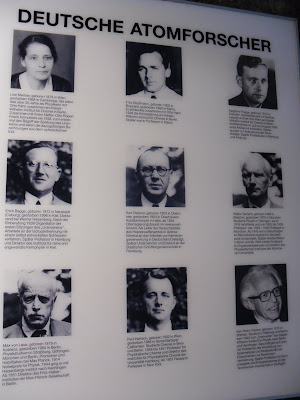 Although the Atomkeller in Haigerloch was located in the French zone, there was a special American task force, headed by Colonel Pash, called the Alsos Mission.
Pash took the scientists prisoner in their offices and homes.
They were sent to England and there kept prisoner until the end of the war. Farmhall country house near Cambridge was where they were held captive by allied powers until January 1946.
That's way better than a prison camp to my mind! 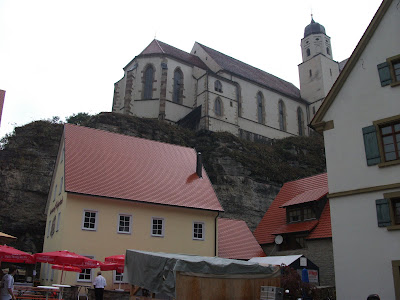 Pash had been ordered to blow up the cellar but, a courageous parish priest named Gulde took Pash to the Castle Church located directly above the atom cellar.  If the Americans destroyed the cellar they would also destroy the baroque church. What a brave priest he must have been to insist that this would be a travesty and how brave of Pash to listen and confine the task force to limited demolition. 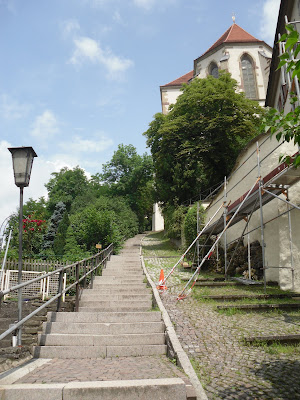 We decided to walk up the 150 or so steps to have a look at the church this priest was so desperate to save. 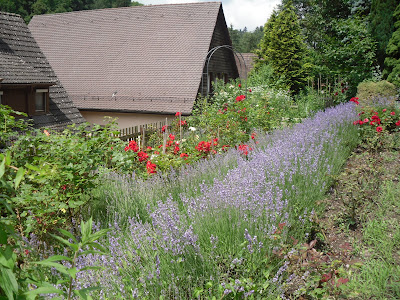 There's a lovely garden to see as you walk up. 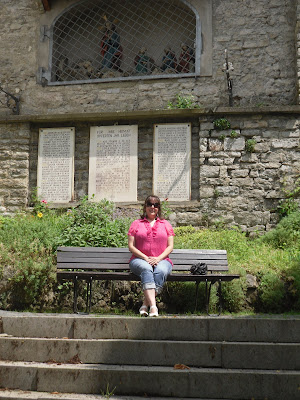 Being another scorcher of a day, I appreciated the bench in front of the church when we got to the top. 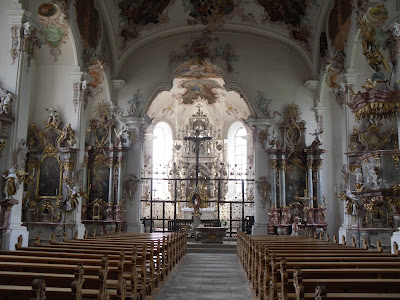 It was indeed a beautiful church. 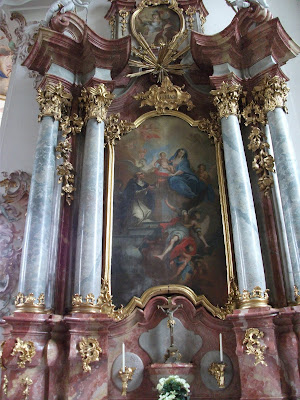 How wonderful that it was saved from
destruction! 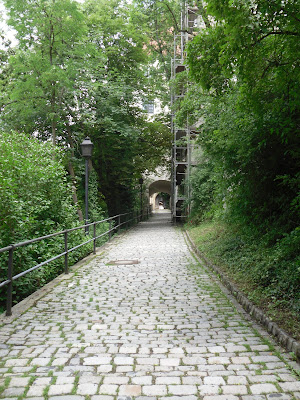 After we finished exploring the church, we carried on up the path to the Castle. 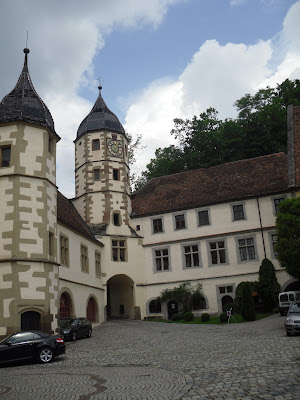 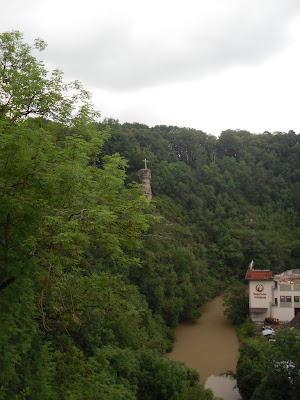 The view from the top 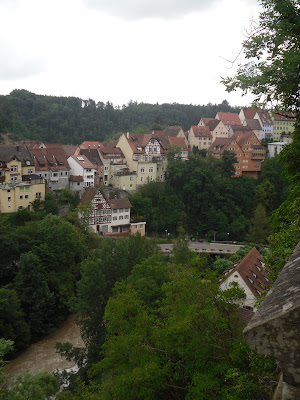 where the castle is, is so pretty. The waters were which are normally clear were muddy by a morning rain shower. 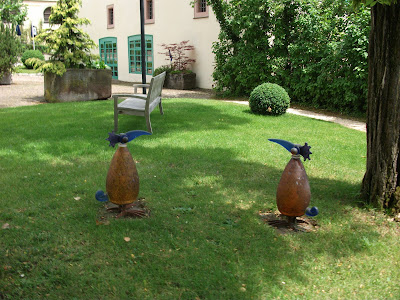 The castle grounds are lovely with enchanting 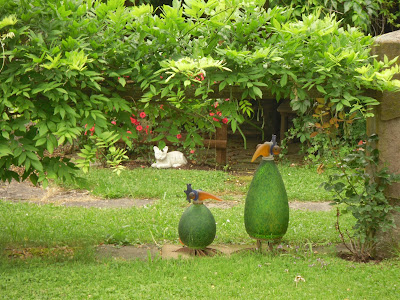 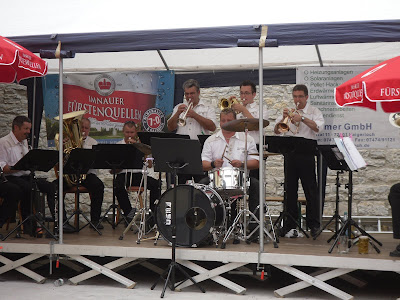 When we came back down the hill to the parking lot, we discovered a little German festival complete with Oompah Band.
For information on the band go to
Nortbertreiffundseinemusikanten.de 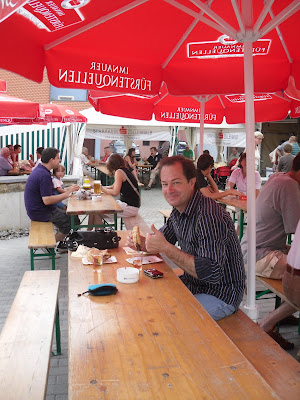 Mac and I had some fest food and drink while we sat back and enjoyed the music.
See, Mac is giving Haigerloch the thumb's up and he says to tell you,
"All the exhibits in the Atomkeller Museum are in German.
Spend the money to buy an English guide!"
Posted by Mimi at 10:29 AM