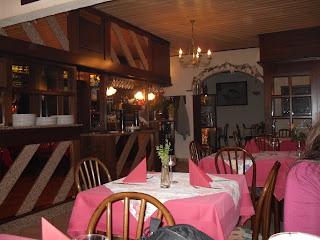 IL Vecchio Lamm Ristorante is two miles from our house.  I love this little place. The steps leading into the Pizzeria are made of pink granite. Notice in the picture that the bar inserts are also made of pink granite. I never fail to think of Maine and it's pink granite whenever we eat here. We have the same waitress each time we go in.  She makes you feel welcome. 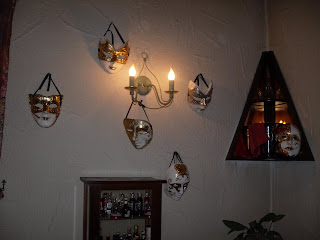 There are many Venetian masks hanging on the walls.  I suspect the owner is either from Venice or travels there quite a bit. 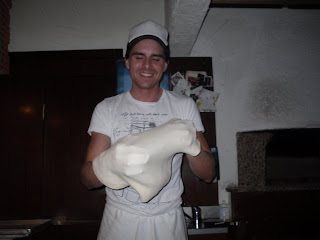 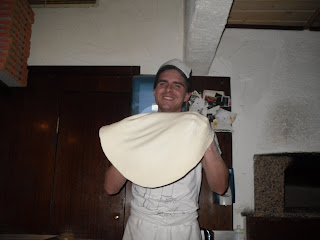 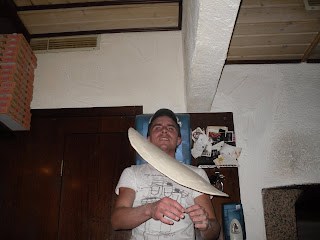 What fun tonight!  A cute little Italian demonstrated how to toss a pizza. Although we hadn't ordered pizza we certainly enjoyed the spectacle. 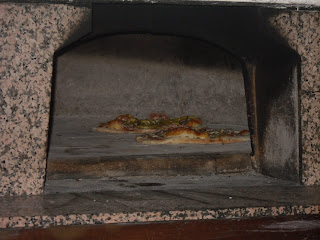 This is the pizza cooking in the pink granite wood fed oven.  Doesn't it look good? 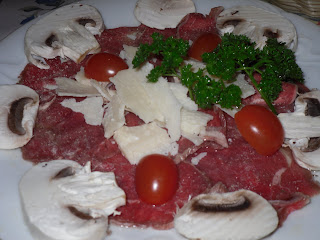 Mac and I decided to try the carpaccio.  For those of you who have never had carpaccio let me explain a bit about it.
What is carpaccio?
It's raw meat!  NOW, before you turn up your noses let me assure you that it is indeed good. Most of you would actually like it if you could get the courage up to try it.

There are two theories about carpaccio.  The first speculation is that carpaccio was created at Harry’s Bar in Venice, Italy in 1950 when it was served to the countess Amalia Nani Mocenigo because her doctor prescribed that she only eat raw meat. Perhaps she was anemic. At her request, Giuseppe Cipriani sliced pieces of raw beef very thinly and dressed them with creamy olive oil vinaigrette. Apparently the dish was named after the 15th century painter Vittore Carpaccio because it reminded Cipriani of his paintings.
A second theory was born at Savini Restaurant in Milan with a woman who was again told only to eat raw meat (maybe it was the same lady!). The waiter suggested she call the raw meat carpaccio because it sounded more elegant then ordering raw meat.  They say a  Carpaccio painting was hanging in the restaurant at the time.

Carpaccio being raw meat must be bought from a reputable butcher, never use the store bought meats at your regular grocery store because you do not know how long the meat has been in the case nor do you know where it came from usually. I have had carpaccio as an appetizer before in Milan. It consisted of thin slices of raw beef flavored with olive oil, parmesan cheese and capers. This particular carpaccio was sitting in a bed of lemon juice. Mac loved it but I prefer it with the olive oil and capers. 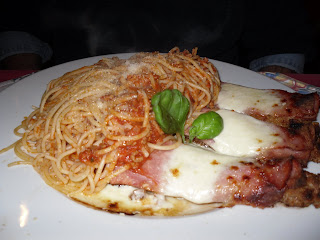 Mac had the Veal Scallopini which was breaded, overlaided with ham and mozzarella cheese and baked. He proclaimed it delish!  Does anyone notice a recurring pattern here? Meat and pasta again?! 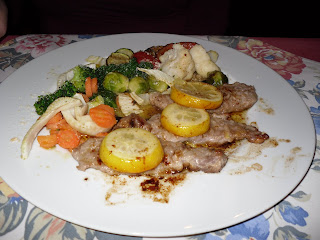 I chose the Veal Scallopini al Limone.  It was nicely done in a delicate lemon sauce. I did laugh when I saw the vegetable choices on the plate.  There was eggplant, celeric, carrots, spinach, zucchini (corgette to my English friends) red bell peppers,califlower and baby brussel sprouts.  I had a weeks worth of veg on my plate. 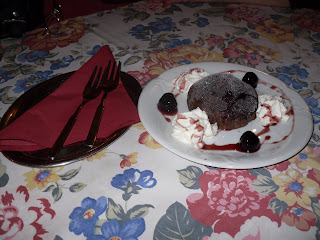 We asked to see the desert menu and the waitress said they only served ONE dessert in the restaurant. It is an ice cream torte.  With her assurances that it was good we tried it.  This concoction was produced by swirling chocolate and vanilla icecream together with cocoa sprinkled over the top. It was garnished with whipped cream and sour cherries.  We shared it and proclaimed it YUM! 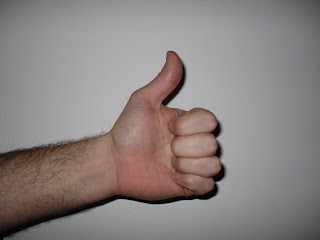 Mac gives this restaurant a thumbs up and says to tell you that the avocados he purchased at the market should be ready in time for tomorrow's blog.
Posted by Mimi at 10:37 PM