Regensburg, Germany which, is part of the UNESCO-world heritage sites had long been on our list of places we wanted to see while we were back in Germany. When we ﻿discovered that  our family friend's son was taking a year here at Regensburg University we moved it up to "must see!"
We'd read that Regensburg was one of Germany's best preserved medieval cities. 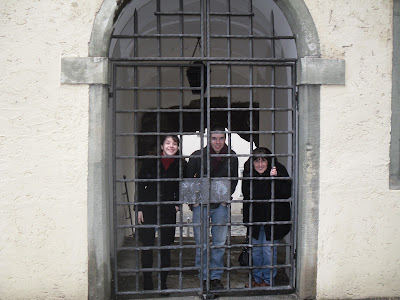 We were very pleased to discover that Anna, Daniel's sister would be joining us on our Saturday tour of the city.  May I just say that we've known them since they were babies and they are now exceptional young adults.
I thought we'd start the blog tour with the Porta Praetoria which, is the gate we are standing in. 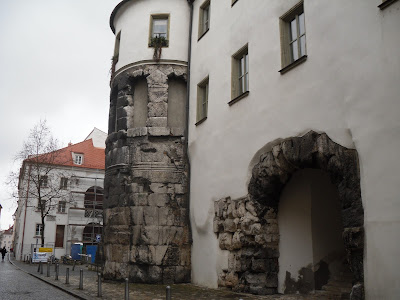 In AD 179 the Roman's built a camp for their legion called Castra Regina. This is what is left of the North Gate of the camp.  Mac and I had already seen the Porta Nigra the German city of Trier's northern gate that the Roman's built about the same time. These two gates are the only remaining Roman gates geographically located north of the Alps. 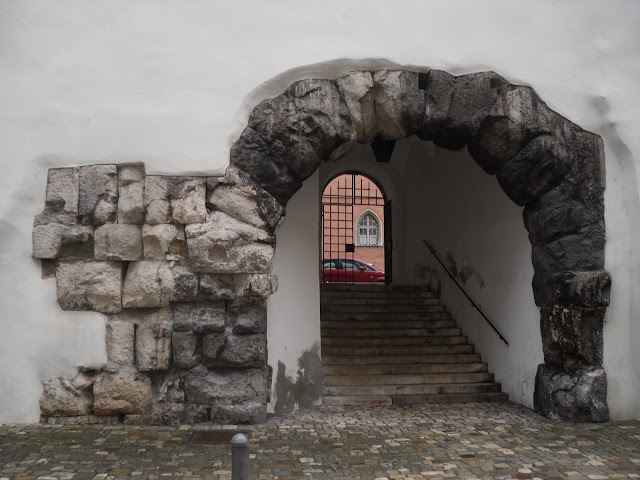 This is worth seeing if only to see the massive stones that were placed together.
Those Roman's certainly did have some engineering skills! 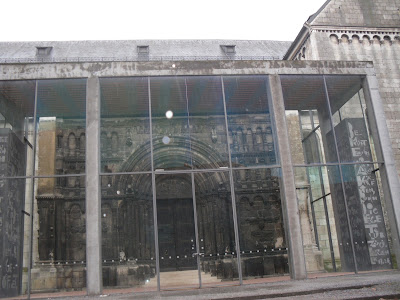 Next stop, the Scottish church of St. James, built by Hiberno-scottish monks about 1090.
It's entrance on the Northside is known as the "Schottenportal".

The entrance is now encased in a glass structure because the sculptures were being destroyed by the environment. 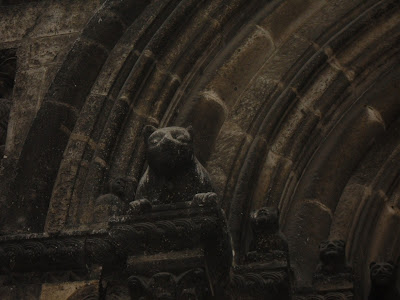 The meaning of the sculptures on the gate have never been fully deciphered. 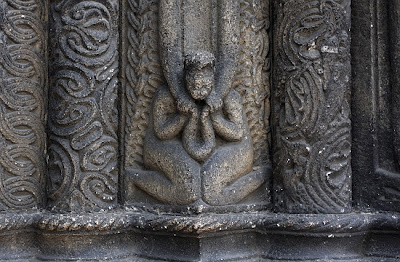 Someone said this picture was of a man "transforming solid stone grooves into pliable material", I thought it just looked like he was trying to hang himself personally. 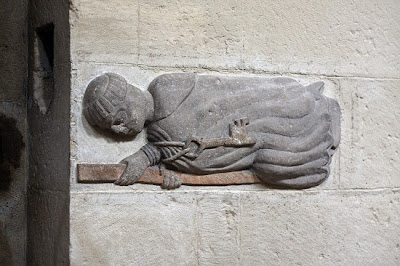 Inside the church we discovered this flying monk with the keys of St. Peter.
Anna thought it looked like he was riding a "Quidditch stick" from Harry Potter.  I was inclined to agree.
No wonder they haven't been able to figure out all these sculptures! 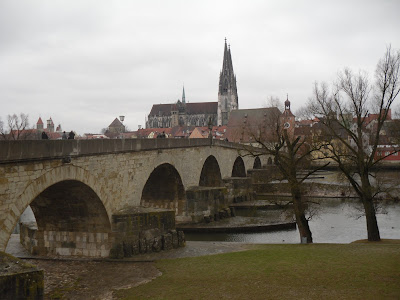 It was a grey day but the Steinerne Brucke (Stone Bridge) still looked pretty.
They say it was the only crossing over the Danube River made of stone in the area. 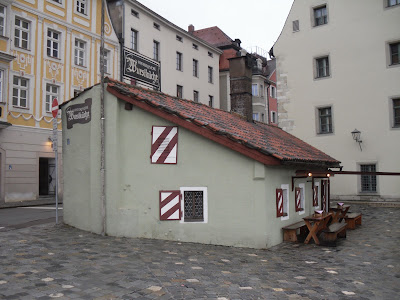 This is the famous WURSCHTKUCHL or Sausage Kitchen.  It was a bit early in the day to stop for a sausage for us, but in the summer you will find tourists lined up to get in. It is even rumured that Goethe ate here.  For people who don't like to read that much, Goethe was a fabulous German writer probably best known for his work FAUST. 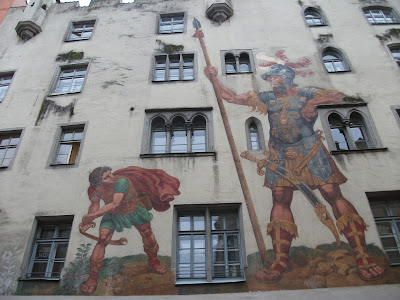 This building has a famous depiction of David and Goliath.  Dan says David represents Regensburg defeating it's enemies and you'll find it on the Haus Heuport.  This is an example of what they call a "patricians castle".  It was built in the 13th century. 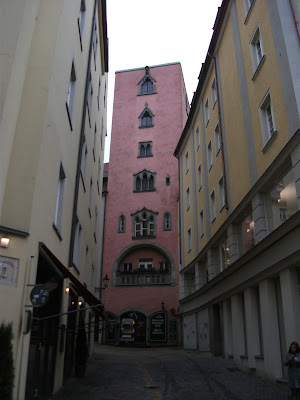 At the end of Goliathstrasse you will see the second highest "patricians tower" in Regensburg.
This is called the Baumburger Turm and was build in 1260 as residences. 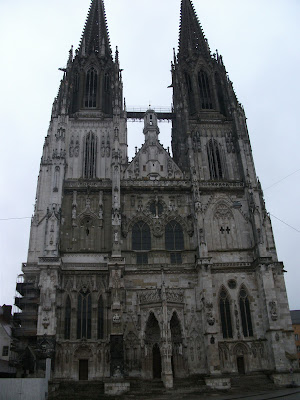 The Dom Church St. Peter's in Regensburg is an amazing example of gothic architecture. 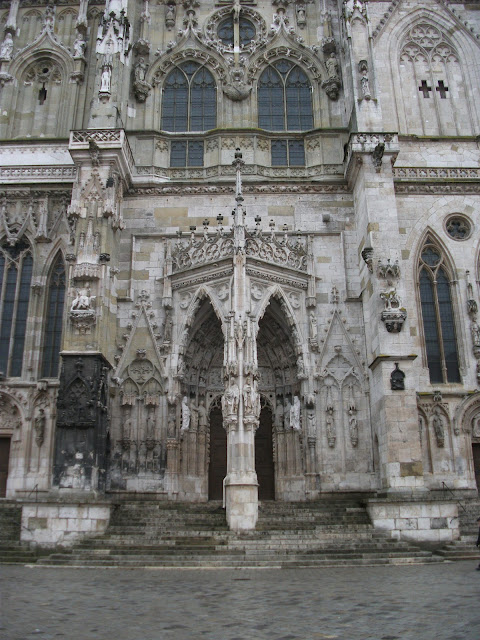 Quite an unusual entrance to a church. 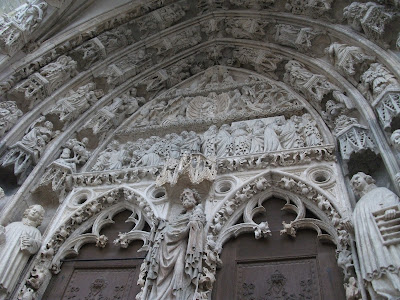 This church was begun in approximately 1260 and was built over the Romanesque predecessor church orginally on this site in Regensburg.
The carvings over the front door were extraordinary. 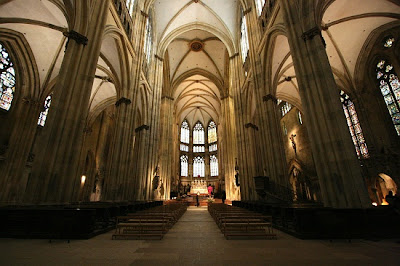 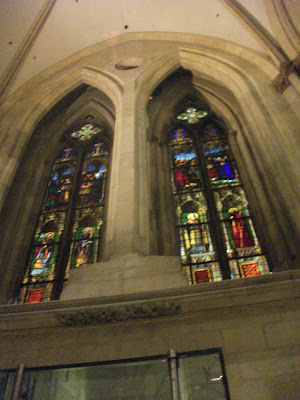 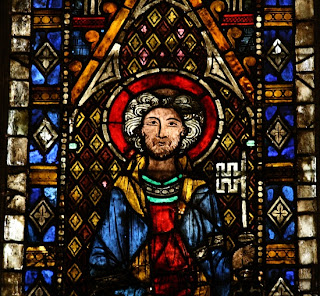 St. Peter's window..... the church was named after him and they say he appears nearly 100 times in images and sculptures in the church. 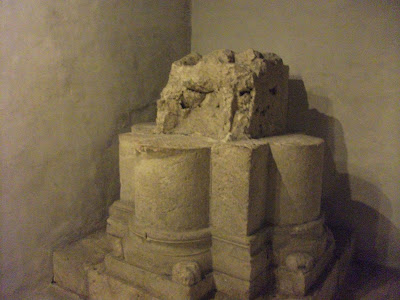 Here is a romanesque column from the previous church incorporated into the church today.

For my Catholic friends it's important to note that Pope Benedict XVI  was at one time known as  Joseph Ratzinger.  He still remains an honorary professor at Regensburg University where he taught Dogma for many years.  This church is where he worshipped while in Regensburg.

So there you have it folks, a great place to visit and soak in history!
Don't take it from me though, Goethe wrote about it and said,
"Regenburg lies in a truly beautiful location, this place simply had to lure a town here."