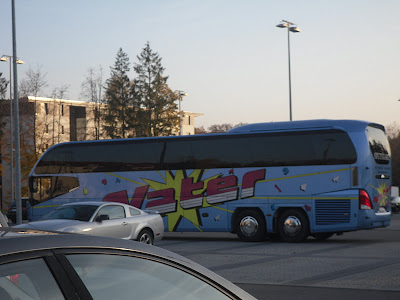 We orginally wanted to drive ourselves but, the tickets were sold out except for the USO
VIP Tour.  We boarded the USO bus on base and headed off with the other
brave souls to attend Haunted Halloween at Frankenstein Castle near Darmstadt
on October 31st. 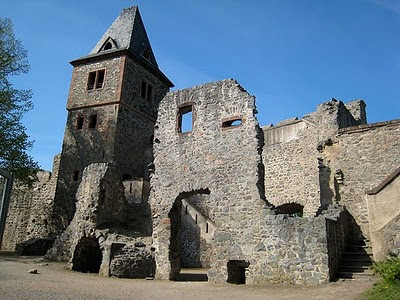 They say it was the Americans stationed in Darmstadt, who came up with the idea of a
"Fright Night" at the ruins of the very old castle.  Arguably, you couldn't ask for a more dramatic backdrop then this castle whose history includes a man named J. Konrad Dippel who  thought he could create an "elixir of life" by reducing animal parts and some say he did experiments on humans.  Whatever he did do, his gruesome experiments led to the town people
driving him away from the town. 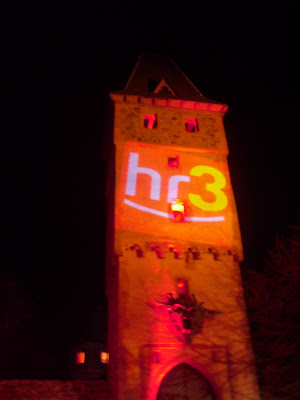 We found the gates to the "haunted" area did not open until
8:00 so we headed over for our VIP Buffet at the Castle restaurant with the rest of our group. 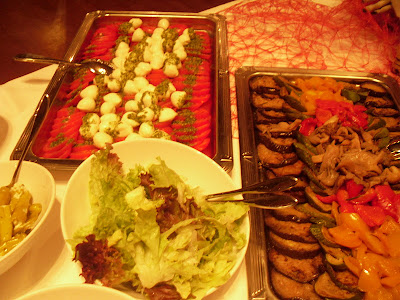 The salad selection was amazing and tasted fab.  We didn't get the pictures of the other
courses, but it included pumpkin soup, pork, melt in your mouth beef,
a curry and rice and lovely veg. 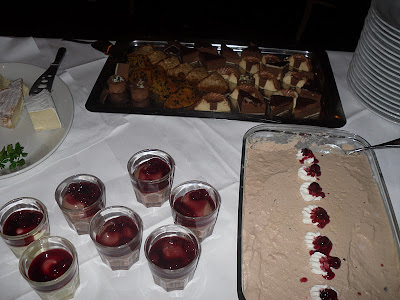 There was an assortment of yummy dessert items.
This buffet was worth the money paid, folks. 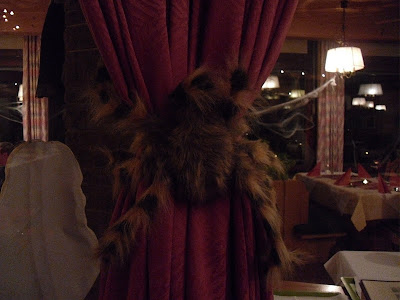 The restaurant even had fun touches.  Here's a big hairy spider holding back their curtain. 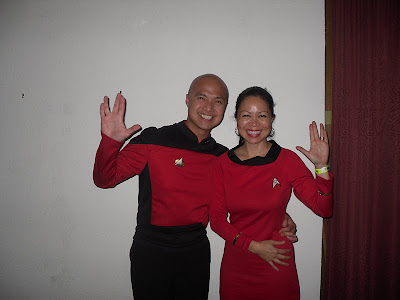 This couple got our vote for best costumes in our group! 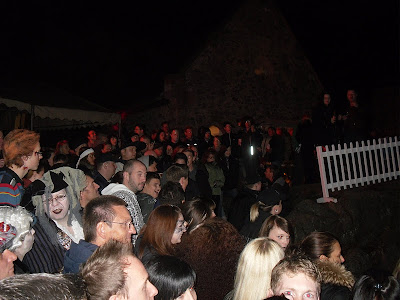 We headed out amongst the crowd waiting for the gates to open at 8 pm. 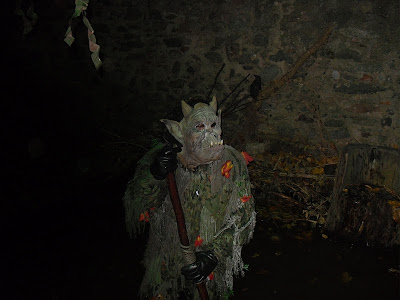 Once into the "Haunted" area we came across ugly trolls, zombies, deranged men and women.
Why don't I just let the pictures tell the story for us? 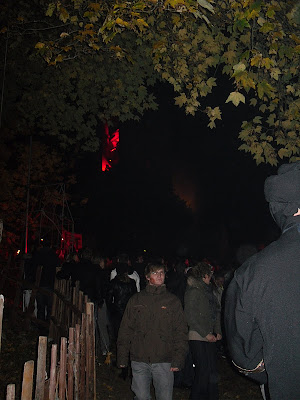 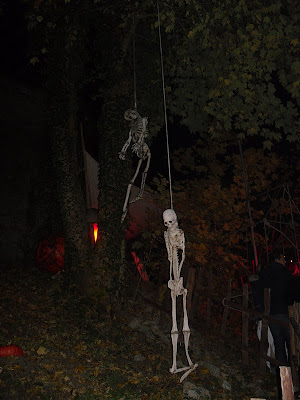 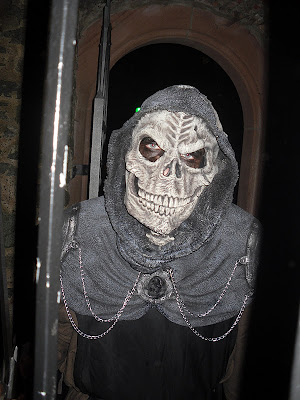 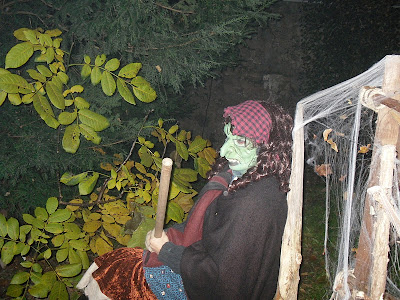 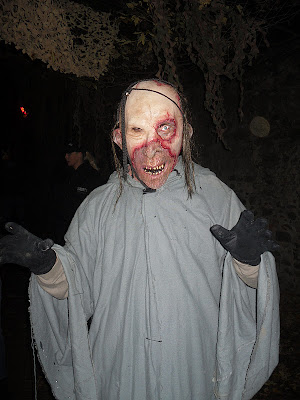 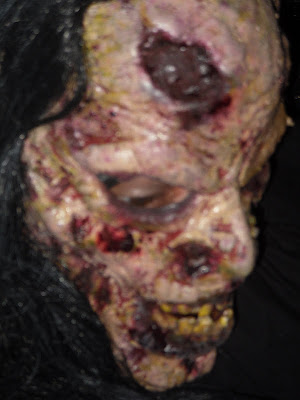 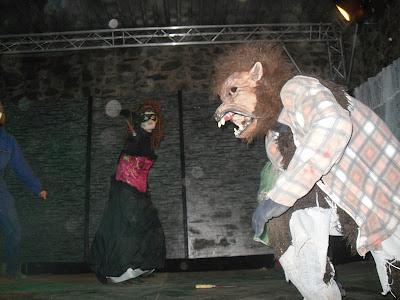 The monster dance on stage! 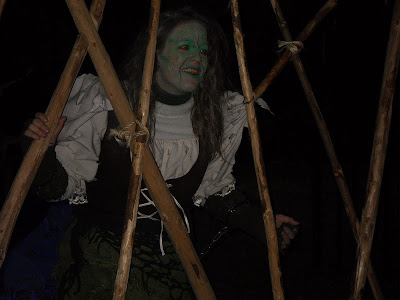 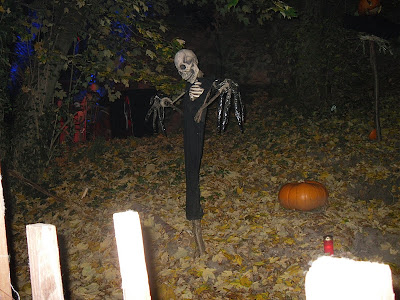 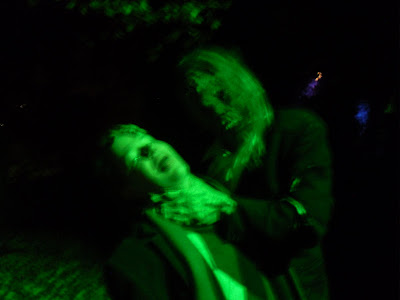 Poor old mac was choked by a monster and thrown into a casket
by a zombie!  He didn't mind though...should that worry me? 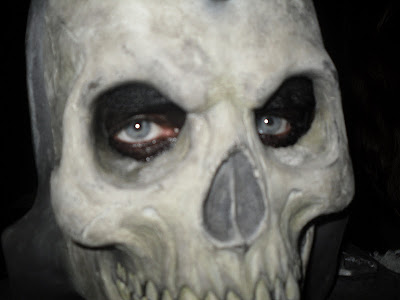 I was terrorized by this goul! 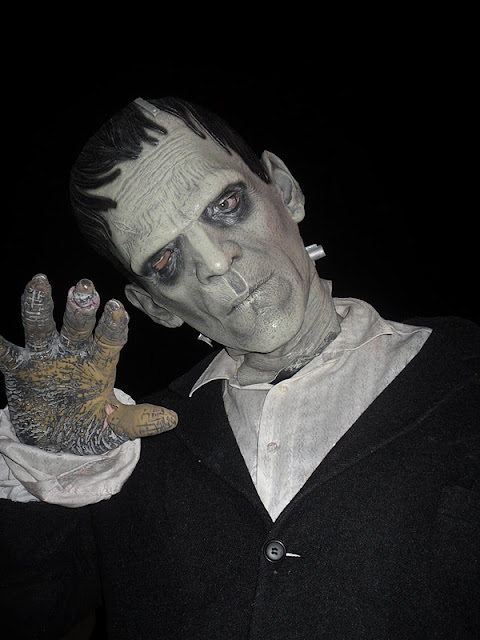 An evening of totally "frightening" fun.
Frankenstein bade us goodbye and said,
"Tell your friends to come back next Halloween, I'm DYING to meet them.
Mhhhhaaa hhaaaaa!"