THE FASHIONS OF OKTOBERFEST CRITIQUE

Most of us won't admit it but it is rather fun to sit in a cafe and people watch.
You see the most interesting things.
Cousin Terry and I are no exception and Oktoberfest seemed a great time to do just that.  Being the fashion divas we are, we thought we'd  give you some fashion tips if you should ever visit
Oktoberfest in Munich. 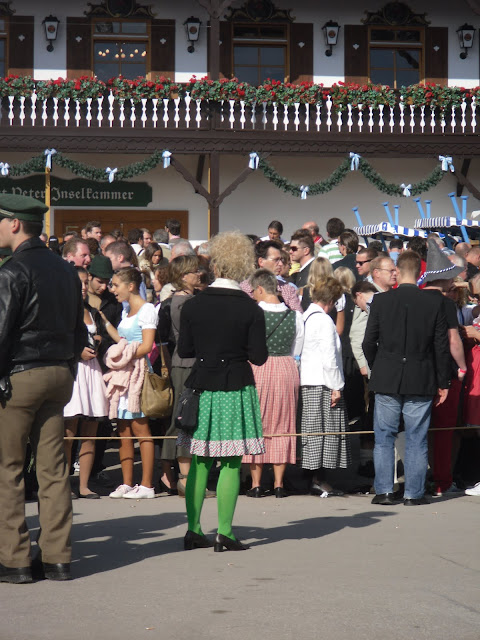 Mimi says:  I was disappointed with the choice of green tights that clashed with the dirndl.
Terry says: This is just B-lech! It looks like she was dressed by a colorblind Leprechaun! 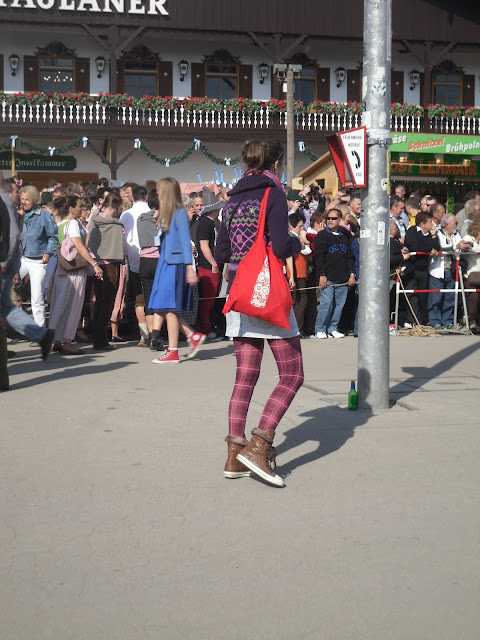 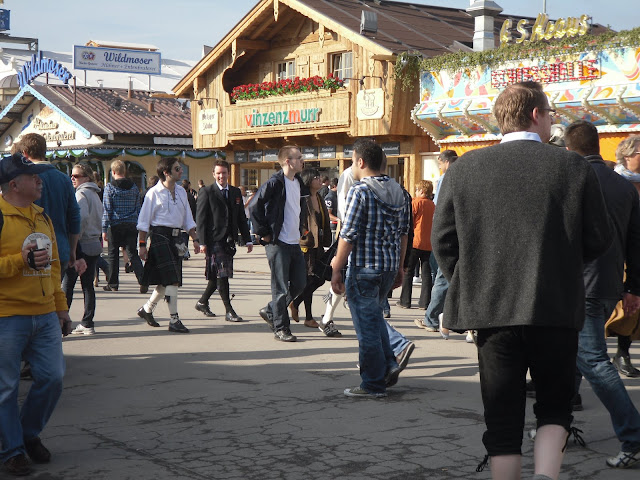 Mimi says:  These Scottish lads show you the proper way to wear plaid.
Terry says:  Alright, I agree with you on this one...these two are rocking it!  Now what did you say they had on underneath Mimi?
Mimi says: I did live in Scotland for four years and I am afraid I only got out alive because I agreed NEVER to disclose that secret Terry! 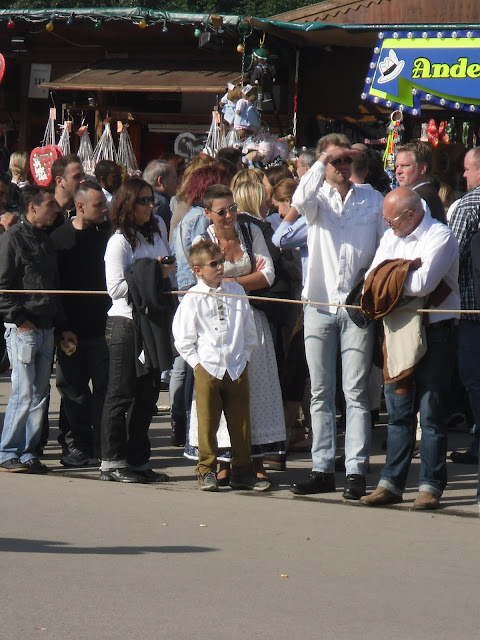 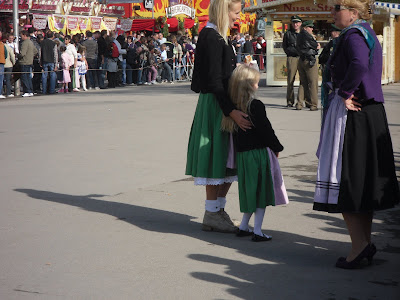 Mimi says: " I have two daughters and I love the mother/daughter dress alike theme.
This Mom really rocked the look with these boots.
Terry says: My absolute Favorite of the day...I need to purchase a pair of those boots! 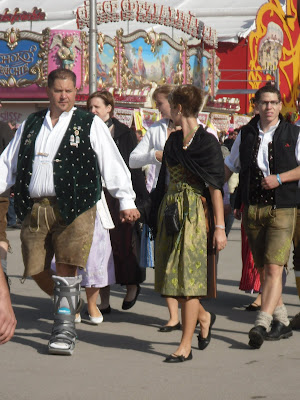 Mimi says: Their outfits aren't bad....I was thinking the boot is a great idea at Oktoberfest! They might feel sorry and let you in a tent to sit.  Good idea Mr!
Terry says:  Perhaps, but "come on" It's Oktoberfest...dress that boot up!!!!! Failed for lack of imagination. 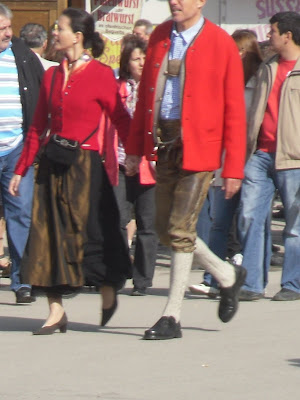 Mimi says: Not bad, again if you dress alike make sure you don't clash!
Terry says:  Alright...maybe nice; but BORING!!!! 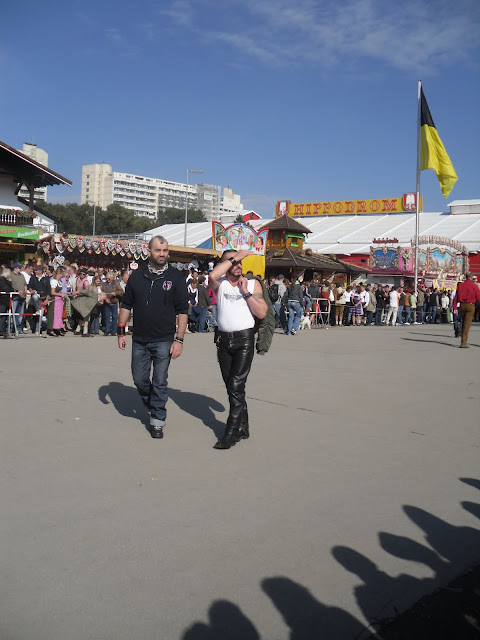 Mimi says:  Now, these leather trousers are just not working for me. Don't copy this look folks!
Terry says:  Well, I don't know Mimi......Take off about 20 Lbs, 15 years and that tattoo..it might work. 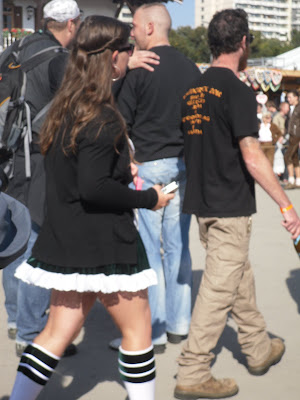 Mimi says: Cute look.  The men loved it.  It's kinda of a cheerleader for a rugby team look.
Terry says:  Yikes!!!! Grown woman or little girl wanna be?! 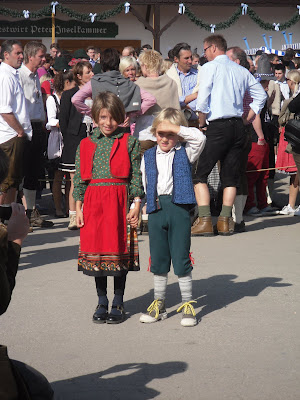 Mimi says:  I think they are adorable!
Terry says:  I agree.."adorable" they look like they live on a mountain with their parents and sheep. So cute. 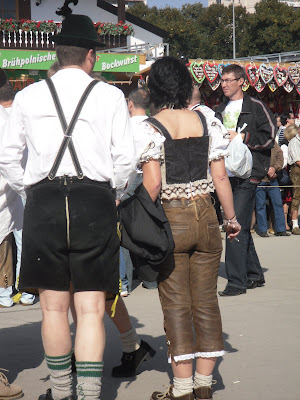 Mimi says:  Two words for you people.  AGE APPRORIATE...and this wasn't.
Terry says: This is just all kinds of nasty..and the cigarette really adds to the ensom! 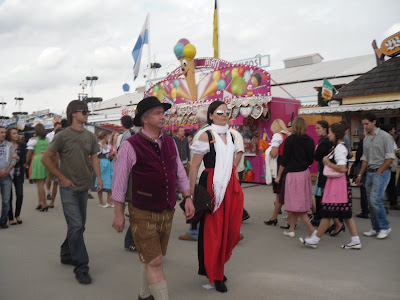 Mimi says: I am speechless at both outfits.
Terry says:  Can we say "un matched?" Not to mention she has too much going on with the dress. Accessories not necessary! 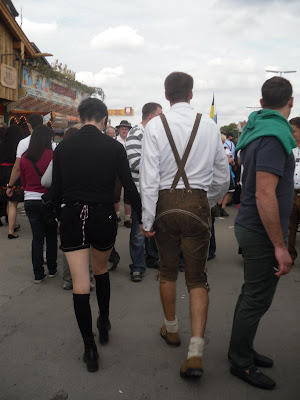 Mimi says:  Pippi Longstocking all grown-up.  She does have the legs for the look, I'll admit.
Terry says:  I have no comment. 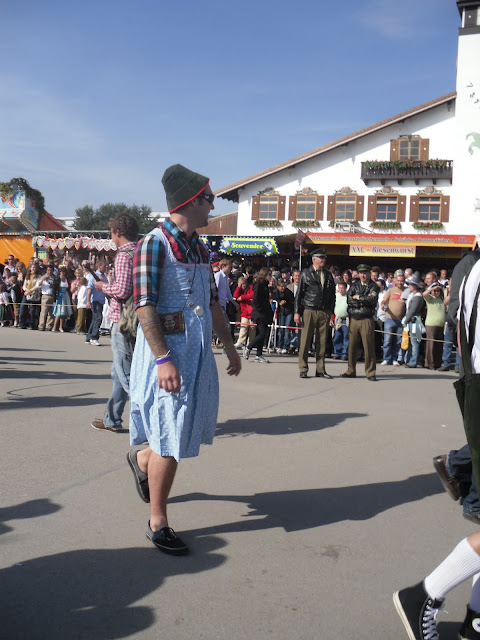 Mimi says:  You always have your males at Oktoberfest in drag but this look is all wrong.
Terry says: He's obviously straight....no true girl in their right mind would have put THIS THING together!!! 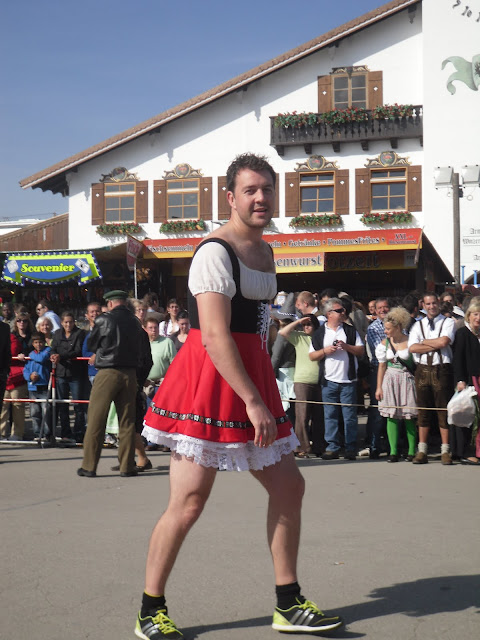 Mimi says:  If you are going to dress in drag...work the look....be comfortable
and have a ball with it.  This guy was.
Terry says: Just all kinds of WRONG going on here!! Oh, my eyes, my eyes!!!
Mimi says:  I don't know I think he's rocking it....what do our readers think? 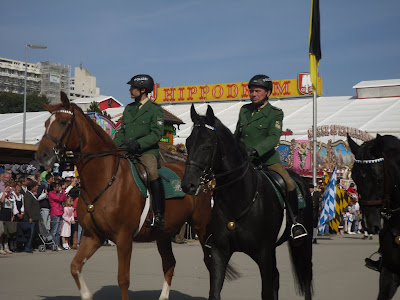 Mimi says:  They aren't the Canadian Royal Mounted but they will do.
What do you think Terry?
Terry says:  Well, I think..."OUCH". 1-800-spank me!!
Mimi says:  Terry behave yourself! 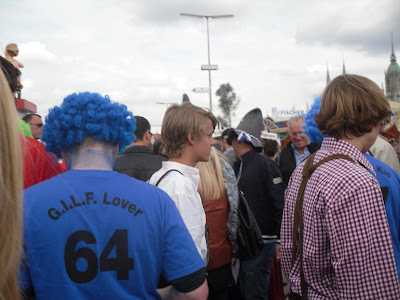 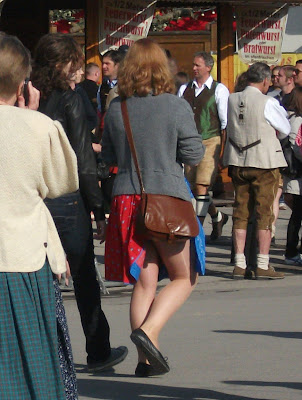 Mimi says: LADIES, LADIES please check the handbag and your skirt when you leave the ladies room.
Terry says:  It could happen to anyone....I suppose, but does make you want to be a little more careful! 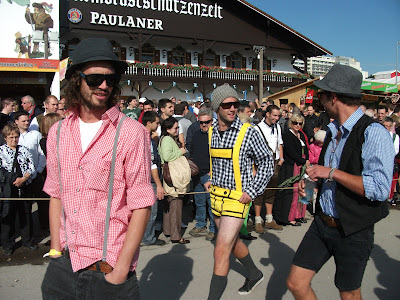 Mimi says:  It was a daring move on his part to dress in yellow overalls that barely cover his whatnots, what do you think Terry?
Terry....?

Sorry folks gotta run and call 911.....My cousin Terry is out cold on the floor!